Matthew 10:42
And whoever gives to one of these little ones [in rank or influence] even a cup of cold water because he is My disciple, surely I declare to you, he shall not lose his reward.

Ever just done something  knowing it was God?  Maybe just bless someone and wonder why?  Ever felt lead to do something out of the ordinary knowing God was using you?  This happens almost every for me at a local music festival, Unity, that we have here in Muskegon, Michigan in August.  This was me fifth year to attend and four of them I have volunteered in the inflatable games.  Mostly teens run the games and being a youth leader I feel right at home.  Every year God sends me a child of some significance that just touches my heart.  Usually it is a child who is having difficulty with the climbing wall and I share Philippians 4:13 with them for encouragement.  One year it took this little girl all three days of the event to finally get to the top.  I rewarded her with some happy meal toys and by the end her mom, myself and the child had tears of joy. 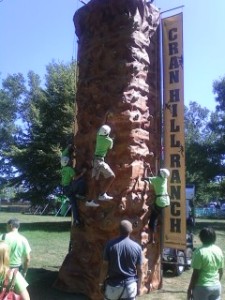 This year was no exception but this one was really specially.  This little boy, approximately age seven, came through the line for the climbing wall and as I was putting his harness on, he said this was his first time here and he was staying with his uncle.  He came through the line again and explained his parents were divorced and it was sad.  Then once again he goes through and tells me his mom is in Italy on her honeymoon.  By the time he had finished for the day, I knew enough about him to feel his pain of divorce and the uncertainty of the new marriage.  Tears fill my eyes now as I remember his little voice crying out for peace even if he did not say it directly.  The last time he came through the line, he reminded me he did not go to church and wondered what I was telling the girl ahead of him about.

I had been sharing Philippians 4:13 with her because she was nervous.  I told him about this and he was still confused, and finally he asked, “What is a Bible and these verses?”  I took a moment and explained this to him and and I could see he was really interested.  My night as a volunteer ended and I went on to enjoy the concerts not giving another thought of this little one until I was at work the next day and I kept hearing that still small voice, “Buy a Bible today.”  I was suddenly filled with excitement!  God wanted me to bless this child!  So after work I bought one all excited to give it to the little boy later that day.  I searched for him during my four hour shift and after asking several little boys if they were the one I was looking for, I was pretty sad to discover he had not returned.

Saturday arrives and the weather is ify.  It had stormed earlier and more were on the way.  We opened the inflatables for a few minutes only to end up standing in the pouring rain.  Bummed again I wondered if I was going to be able to give this Bible to the person it was intended for.  The storms passed and we were able to reopen the inflatables and I began my searching again.  Finally I saw a teenager whom I thought I had seen chaperoning the little boy two days before and I approached him asking if a particular boy was with him and if the boys mother was in Italy at the moment.  The teen looked at me wide eyed and asked how I could possibly know this, I laughed and said the boy had shared with me the last time he was in line for the wall climb.

I instructed them not to move while I retrieved my gift.  I presented the Bible to him and wrote his name on the inside.  I had highlighted Philippians 4:13 for him and showed him how he could find it.  He was so excited I was fighting back tears.  He promised me he would read it and tell me all about it next Unity if he could come.  God is so awesome!  Who knows, that little guy could be the next Billy Graham!  My friend asked me later if I realized that I had just placed a lethal weapon in the hands of a seven year old!  I said give me some more!  I am always honored to volunteer at Unity.  For me it’s not about the music, as awesome as it is, but it is about serving and being obedient to the things of God.  I look forward to next year, wondering what God will do with me next!