Instead, glorify his mighty works, singing songs of praise. 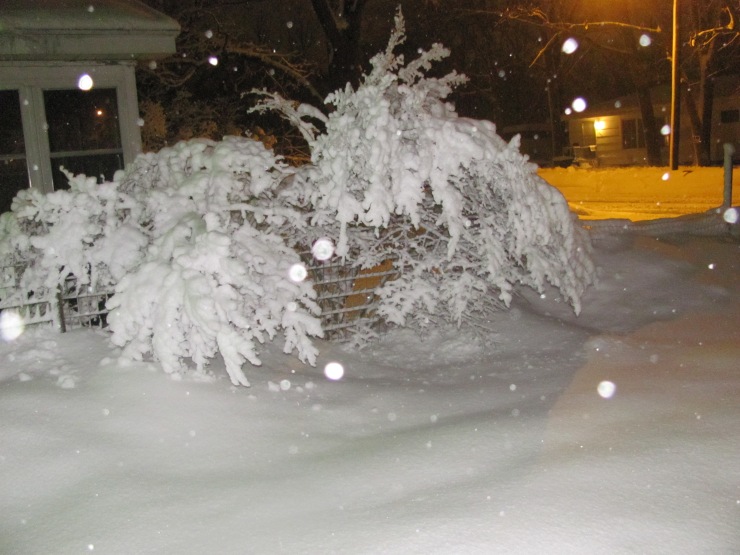 Ever felt so broken that life really did not seem to matter?  How about so broken and dead on the inside but to the outer world you appeared okay?  Perhaps brittle and falling apart and hiding under a blanket of a made up reality.   Maybe like the picture above, we know the dormant death which lays beneath the snow.  The branches of this bush are dead and awaiting new life to come in the spring, so much like many of us.  We wait out for seasons in our life, knowing there will be a shift and a change.  We lie waiting in hope for a new season to come into our lives.  A season of prosperity and happiness.  What about those who don’t know there is a season of change?
When I was in the middle of my last marriage, I faked it until I made it almost ever day.  To the outside world I had it all together.  I was a full time manager, mom and church goer.  I worked 43 hour weeks, went to all the school functions and even sang in the choir at church.  Yup, I seemed to have it all under control and no one was the wiser, except for me.  Inside I was a little girl screaming as loud as she could but no one could hear her cries.  Only God knew her struggles, no one else could even see them because they were so disguised.
I worked so hard at keeping my home life a secret that I never let anyone into my life.  While I was trying to scrape up enough money to put dinner on the table, my husband was trying to figure out how and where to get his next set of drugs.  While I was at work I was focused the best I could while in the back of my mind 100 other thoughts were running around in my head.  How was I going to provide dinner tonight?  Where was I going to get money to pay the bills? I was overcome with so much disaster it was ridiculous.  I look back now and I have no clue as to how I ever kept it all together.
What I have learned from this past of keeping everything undercover is simple, it is much easier to be myself than to have to hide things all the time from everyone.  I have found so much freedom in just being Brenda.  I have no sin to cover up.  I have no unreal expectations from my new husband.  I have a desire every morning when I wake up to just be me, no matter who sees it.
Are you living an under cover disaster life?  Are you pretending that things are okay?  If someone walked up to you today and asked you to answer honestly if you were truly happy, what would your answer be if you actually told the truth?  I am glad no one ever expected that of me I would have probably just broken down right there and confessed it all.  I say all of this to give you hope.  Underneath that bush up there covered in the white snow is a masterpiece of God waiting for renewal.  In the spring it will burst forth with new growth and a vibrancy it was unable to show while in it’s dormant condition……much like a person who has allowed God to take control of their life.