26Look at the birds in the sky! They don’t plant or harvest. They don’t even store grain in barns. Yet your Father in heaven takes care of them. Aren’t you worth more than birds? 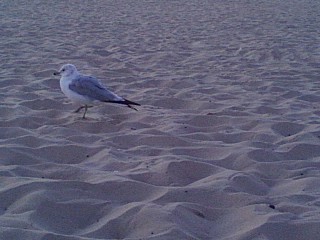 Ever feel like you are unworthy?  Sensing you have no value in anybody’s eyes?  Well, read the above verse until it sinks in just how much you are valued by God.  He takes care of all of His creations and you have a great deal of value.  If He takes care of the birds, He will surely provide for you.  In the past few years I have totally seen how God cares about me and I often just stop and ask, “Why?”  because I cannot not always comprehend His faithfulness to take care of me in ALL of my situations.  We are very valued by God.  He loves us deeply and tries to tell us in so many ways.  Now that I have assured you that God loves you and that you are of great value to Him, let me share a short glimpse of how God works sometimes to take care of the birds of the air.

Today as we had a few extra minutes between lunch and our meeting, we happened to take a drive to the beach.  I was taking a detour so to speak to find a garbage can to throw away a cup and we just happened to come upon a parking lot which had several seagulls wandering around it.  My daughter happened to notice one that appeared to be carrying around a fish and suddenly she is yelling at it not to eat the fish because it had a hook in it.  On a closer view of this poor bird, she notice it was not a real fish but bait with a hook in it and it was secured in the beak of the bird.

Well, what do you do?  There seemed no reason to try to get the bird and remove the hook, because it would either run away or fight us, so we tried to come up with solutions.  The coastguard station was only a short distance away so I drove over there, only to see a seven foot fence all around it and a locked gate.This is where it becomes a God moment!  Suddenly from inside the fence, we saw a young man in uniform walking across a parking lot headed for the building.  He somehow (God steered him) decided to look in our direction and saw us waving wildly, so he waved back but then I put my hand up to indicate for him to stop and then gave him the “one minute” gesture.

I stopped the car and ran up to the fence where he met me.  I told him right of the bat that this would sound crazy and asked if he had the number for the DNR and he told me he could give me the number with hesitation in his voice.  I then explained the circumstances of that poor little seagull and he started to smile and told me he would call them and let them know.  I thanked him and blessed him and then we left for our meeting.  What where the chances that a man would be outside at the EXACT moment we needed help?  What made him glance in our direction?  God cared enough for that bird in distress that He showed me the garbage can which led us to the bird and then gave us enough compassion to try to do something.  Then he showed us someone who could help who did his part and when we went back after the meeting, the bird was not there any more.

All in all, each of us did our part and so did God.  I feel this is the way He works in our lives, making moves on our behalf and setting up moments of “encounterment”.  Yes, He loves us that much!  To me the lesson of this seagull was compassion.  By having compassion for the seagull, though we did not witness to this man, we showed God to him by just moving with compassion for one of God’s special creatures.  Isn’t that a good lesson for all of us?  Be moved by compassion just like Jesus and lives will be touched all around us when we least expect it.  I thank the man at the Coast Guard post even though he will probably never read this and I also thank those who operated out of concern for animals to free this bird from what weighed it down from being free like God created it to be.  Hows that for a short blog?  lol Just gives me the warm fuzzies, what about you?

4 thoughts on “One Spared Bird!”